Be Stirred, Not Shaken

Eyes on the Horizon:  Navigating this Life

“Let your eyes look straight ahead, and your eyelids look right before you.  Ponder the path of your feet, and let all your ways be established” ~ Prov. 4:25-26

A while back, I had the chance to spend a few days sailing off the coast of Sweden.  It was an idyllic off-the-grid weekend, and we had the opportunity to act as first mates to the boat’s captain, Patrik.

The first time I took my turn at the wheel, he gave me a point far out on the horizon to aim for (a tiny white speck that ended up being a lighthouse) and then sat back to chill.  I steered for a while, but increasingly found myself staring intently at the small GPS screen, which had two lines—the one he’d charted and the one we were currently on. 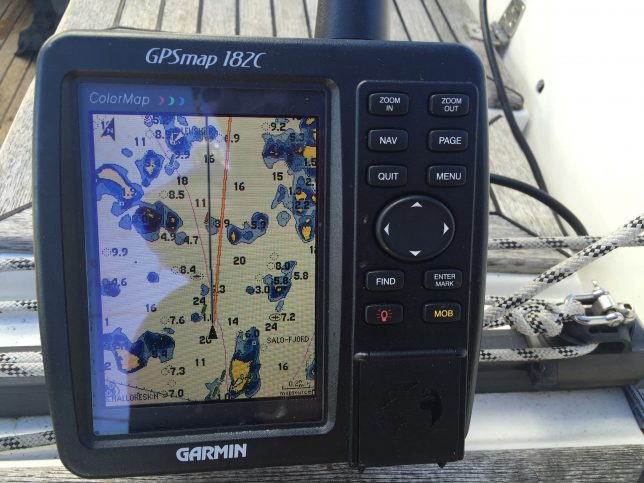 I was laser-focused, trying to keep our direction completely aligned with the course he had charted, making tiny adjustments, struggling to turn the right way and guess how the boat would react to the waves and wind.  The result was me zig-zagging through the water rather than smooth, straight sailing.  When he realized what I was doing, he corrected me.

“Don’t look down, look at the horizon.  That point I gave you out there, that is your goal—navigate by that.  Yes, look down every so often to check for rocks and obstacles, but down there shouldn’t be your focus.”

Perils while navigating this life

Why does this story stick with me, even a few years later?

First, it immediately brought to mind the statement in Hebrews 11 about how the faithful of God through the ages were focused on the promises they saw “afar off,” remaining intent on that vision of the future no matter what threatened them in the present.

Secondly, it made me consider the needs and impact of the immediate vs. the eternal, and how we should be balancing the two while navigating this life.  Make no mistake, we’re meant to actually live our time on this earth, which means we do have to give attention to “right now”.

But it’s also easy to get caught up in the daily grind, with all the negativity, what’s going wrong (or right), not understanding the direction of things or why things happen.  And if we spend too much time thinking about the immediate, it can cause us—ultimately—to lose sight of the eternal.  We’ll zig-zag through life, wasting energy and ending up slowly but surely off-course.

“Without vision, the people perish…”

What is our goal?  On the one hand, that’s supposed to be a simple enough answer.  Our goal is to be among God’s firstfruits, to eventually stand in front of His throne as part the Bride of Christ.  To hear “Well done, good and faithful servant!”  That is our little white dot of a lighthouse way off in the distance—what we’re navigating toward.

But I’m not sure how many of us think about that specific goal every single day, multiple times a day (me included).  Part of that is simply because daily life tends to consume us, but it also may have something to do with the fact that it’s difficult to actually picture.  We have no clear idea of what that glorious future looks like, no frame of reference for what it will be like, and so it doesn’t always feel as real and pressing as it should.

Let’s actually look at that scripture in Hebrews a little closer.  Paul tells us, “These all died in faith, not having received the promises, but having seen them afar off were assured of them, embraced them and confessed that they were strangers and pilgrims on the earth” (Heb. 11:13).

That word translated “assured” basically means convinced, that they relied on and had confidence in that future outcome.  It evokes an inward certainty that they acted upon in their daily lives.  God’s kingdom wasn’t a dim fairytale-like future event for them—it was as real as their everyday lives.  How do we know that?  Paul continues:

“And truly if they had called to mind that country from which they had come out [a.k.a. this world and this life], they would have had opportunity to return.  But now they desire a better, that is, a heavenly country.  Therefore God is not ashamed to be called their God, for He has prepared a city for them” (Heb. 11:15-16).

Basically, they had other options.  We all do.  If their certainty in, and value of, the future God promised had wavered or hadn’t outweighed everything else, they could easily have shifted their focus and attention to the cares of this world.  Instead they stayed totally locked in on that little white dot on the horizon.

Putting that into practice

It’s hard sometimes to figure out ways to make the reality of the kingdom a part of our day-to-day lives.  But one thing that struck me recently is that Jesus actually gave us a mechanism for this.  In His model prayer, He tells us first to focus on how amazing and powerful God is, and then to pray for God’s kingdom to come and that His will is done on earth as it is in heaven (Matt. 6:9-10).

Everything about that prayer advice is for our benefit.  God doesn’t need us to tell Him how awesome He is, and He doesn’t need our help in bringing about the kingdom or His will.  Rather, He’s telling us that every single day when we talk to Him, we should begin by focusing on those three things—to remind us of our destination and to whom we should be looking.

God has set the end point, given us something to navigate toward.  He told us through the prophet Jeremiah, “For I know the plans that I have for you…to give you a future and a hope” (Jer. 29:11).  He sets us on that path, but it is on us to actually stay on course.

It’s why we’re cautioned not to love the world too much.  It’s temporary, and we will only be successful if we set our eyes on the future kingdom (I John 2:15-17).   This is something that Lot’s wife learned the hard way.  She was consumed with the world she lived in, and ultimately judged it as being much more valuable than what God was pulling her toward…and it was her downfall.

Paul cautions us to “set your mind on things above, not on things on the earth” (Col. 3:2).  This sounds kind of lofty, but Jesus states it much more simply—that where our minds dwell reflects the quality of our lives and character (Matt. 6:21).  Because the translation uses “treasure” in this verse, I think it can feel a little disconnected for us in modern times, and we often end up defaulting to using this as a reminder not to put too much focus on physical wealth or buying things.

But the Greek word here indicates not only wealth, but a repository, some place you deposit and store things.  This includes a metaphorical repository of thoughts, feelings, and purposes.  I believe this is perhaps the greater intent of this verse—a focus on where we are investing our thoughts and time, and the quality and direction thereof.

Distraction is one of the biggest obstacles facing God’s followers today, and one of Satan’s greatest weapons.  Despite our best intentions, it’s so easy to sprint through each day with all the myriad commitments and technological distractions, and never make time for building our relationship with God.

Paul warns us of the dangers, saying, “Therefore we must give the more earnest heed [pay close attention] to the things we have heard, lest we drift away” (Heb. 2:1).  The word “earnest” there has a connotation of superabundantly (no, I didn’t make that word up, the Greek dictionary says so).

In other words, we should be wholly focused on spending time with and living God’s words every day.  It’s interesting to note that he doesn’t say “turn away”, but indicates that when we forget to focus on that white dot out in the distance, we drift off course.

Read next: FOMO:  How to Derail Your Relationship With God

Checking for rocks and obstacles…the immediate vs. the eternal

As I mentioned at the beginning, just because we’re supposed to be focused on a future vision does not mean that the immediate isn’t important.  Remember, Patrik didn’t say that I should never look at the GPS.

Rather, he told me I needed to check in regularly to make sure I wasn’t about to run into rocks or ground the boat.  I learned to tell from looking at the shading which obstacles could just be skated over, versus others that were close enough to the surface to do damage.  We should do the same.  But it shouldn’t consume all of our attention and focus.

A lot of the instruction Jesus gave his disciples right before He was crucified was about their role in the world, warning about the temptations before them, and providing encouragement to not lose focus.

While not the intent of the phrase, I think “the devil’s in the details” is a good one to bear in mind.  There’s a famous passage in C.S. Lewis’s The Screwtape Letters where a senior demon counsels a newbie on how to get his human “assignment” to stray from God.  His basic answer is distraction.  All the tiny details of our lives provide a perfect canvas for our adversary to work from.

But our day-to-day life DOES matter.  It’s why we pray for God to provide our daily bread (physical, certainly, but the intent is Christ as our spiritual food).  It’s where we build and maintain close relationships and learn to put God’s way into practice (or fail miserably, and hopefully learn from that as well).  It’s our training ground.  We just have to remember to guard against “setting our mind on earthly things” (Phil. 3:20).

Paul tells us that we should “lay aside every weight, and the sin which so easily ensnares us, and run with endurance the race that is set before us” (Heb. 12:1).  When I run, I have a bad habit of looking down to avoid spraining an ankle or stepping on a snake—but in doing so, I have legitimately run into a tree or ended up off-course before because I’m not looking straight ahead.  Our lives can often be much the same.

My thoughts circle back to Patrik as I think about the conclusions in this study.  He knew his boat, the sea, and his tools (like the GPS) intimately because that’s where he spent his time.  He lived on boats constantly, learning and refining his skills.

Because of his knowledge and experience, he had mastered the art of keeping an eye on the goal and knowing how to navigate the immediate dangers.  He could glance down momentarily and easily identify any possible obstacles and how to react.

We’re in a similar boat (pun intended).  There’s no silver bullet for finding the right balance between looking at the horizon and focusing on right now—time and experience are how we learn.  We must spend time with the tools God has given us, consistently learn and think about how to refine our techniques, and put the things we’ve learned into practice.  This is how we will become expert navigators in this life. 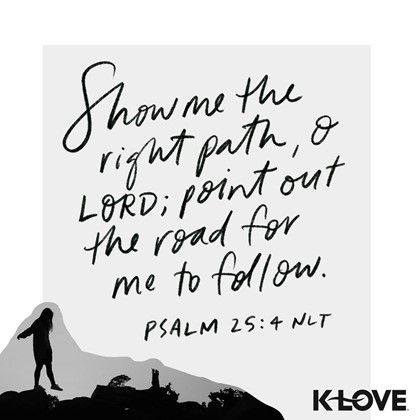 A Practical Approach to Worry & Anxiety in the Bible

Studying Psalm 20:4 – Our Heart’s Desire and Accomplishing Our Plans