A while back I was re-listening to a sermon by Gary Petty in the “Agape” series (search by his name, they’re on the last page), the one on not being provoked. In it, he was talking about the difference between being angry, which is not inherently wrong or sinful, and how we react to or express our anger—which often is.

Anger is something I’ve always struggled with. Not blinding rage, per se, just extreme frustration with people, things, and situations. I learned at a young age to keep a choke chain on my temper, because when I was hurt I’d end up saying purposefully hurtful things (and I do have a way with words), things I would never say otherwise. As an adult, it hadn’t been as much of an issue until several years ago, when I was going through a period of extreme frustration with my job and life, and just felt angry all the time.

Anger–the emotion vs. what it drives us to do

Satan knows all the right buttons to push to send me on a downward mental spiral of frustration and anger—generally it has to do with being frustrated over what I see as someone else’s awesome life or career (which I think I deserve), or anger at how a certain situation went or someone treated me. Chances are, he knows your buttons too. I sit and run over it in my mind, totally destroying my mood and getting more and more angry. Basically, I make his job easy.

Anger is contagious, a destructive virus that spreads everywhere it goes. The Proverbs tell us that “a wrathful man stirs up strife, but he who is slow to anger allays contention” (Prov. 15:18). The words paint a pretty accurate picture of this angry person going around and poking and stirring things up everywhere he goes—like a nest of hornets. You’re going too slow on the highway so someone honks at you and swerves around you. Then you get mad and snap at the daycare attendant who mentions that you’re late, then she loses her temper with one of the kids. The phrase “allays contention” (translated “appeases strife” in the KJV) comes from root words that bring to mind soothing, quietness, or rest. The person who is slow to anger has a way of calming quick tempers and taking the sting out of words or actions.

It’s interesting that the scripture in Corinthians says that agape (God’s love and character) “is not provoked” (I Cor. 13:4). It doesn’t say “is never angry” or “never gets frustrated”, because those are both completely normal human emotions, often chemical reactions we can’t help. However, human anger is destructive when it motivates us to act. Another Proverb repeats the “an angry man stirs up strife” part, but then adds “and a furious man abounds in transgressions” (Prov. 29:22). When we are being motivated by anger, we are almost always being completely self-centered and we lose perspective on the fact that the other person is human and might have a motivation we can’t see or circumstances we don’t know about. This leads us into sin, and basically invites Satan into our minds to play. I find it interesting in Colossians where Paul says, “But now ye also put off all these; anger, wrath, malice, blasphemy, filthy communication out of your mouth” (Col 3:8) because in my opinion this isn’t a random list—these are related, and have a snowball effect. Anger and wrath lead to feelings of malice toward another person, which causes you to blaspheme in the mind and say things that, whether true or false, are sin nonetheless.

Controlling anger is our choice, and has nothing to do with the other person

The other part of “is not provoked” that’s interesting is that it says we should not allow ourselves to be provoked—not that others won’t give it their best shot. Regardless of the other person, the burden is still on us to choose not to take offense or to try and reconcile with the other person. Proverbs 15:1 says that “a soft answer turns away wrath, but grievous words stir up anger”. Someone may say or do something to anger us, but we can stop things from going any further by giving a conciliatory answer and choosing not to engage in a fight. I often get emails at work that irritate me, so I put on my “hammer pants” and start furiously typing a response back. However, I’ve learned (the hard way) that I need to step away from the email for a while and do something else, then come back and re-read it; I usually edit it down to a much nicer, conciliatory tone while still getting my point across, or delete it altogether. The old adage “you catch more flies with honey than with vinegar” is certainly accurate, and I’ve found that I can get much further in resolving a situation when I try and assume the best motivations in the other person.

Because the thing is, it’s exhausting to be angry all the time. It takes so much energy to hold onto negative thoughts, and far less energy to let go and move on. As I mentioned in the intro, I spent a good solid year being frustrated and angry much of the time. And then I came to a point where I realized that I had three choices:  1) I could continue to be angry all the time and just be miserable; 2) I could do something to change the things that were making me angry; or 3) I could accept certain things and choose to be happy and thankful for everything God had blessed me with. I chose Door #2 for a little while, looked at other job opportunities in other areas and interviewed for several positions. And what I discovered along the way was that I was very blessed—I had a job where I was valued, had security, flexibility, lots of time off, some good seniority, and a salary that let me live comfortably and do things I love, such as travel. Basically, I realized that most of my anger stemmed from being unthankful for the blessings that God had abundantly given me, which is a major sin, and a topic for another time. But putting that filter on my feelings helped me turn a corner in how I dealt with them.

I have worked hard over the past couple years to realign my thoughts and focus every day on how I react to anger. For me, so much of controlling and defusing anger comes down to perspective. If someone is being rude to me, I try to think about how they might be having personal issues or just be having a bad day. If I get frustrated with my job, I focus on something I love about my life unrelated to work, such as how awesome my friends are, how much my kitties love me, or going out for a nice dinner. If someone is being an idiot in traffic (which, let’s face it, is one of my major hot buttons), I try to remind myself of the fact that I’m blessed to have a job where no one cares what time I get to work, so if I’m five minutes later than planned it’s not the end of the world. The key is finding a solution to whatever is angering you. Either there is one or there isn’t. If there is, you do what you can to make it happen and you don’t look back. If there isn’t, you choose to accept that, put it in God’s hands, and don’t look back. Either way, you move on.

“So then, my beloved brethren, let every man be swift to hear, slow to speak, slow to wrath; for the wrath of man does not produce the righteousness of God” (James 1:19-20). 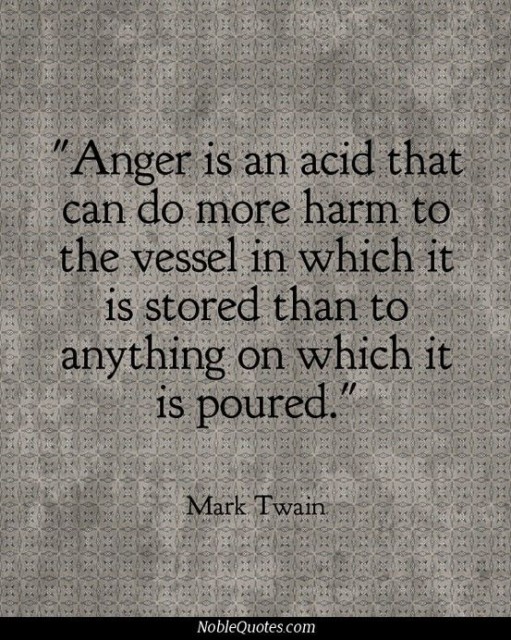 Unthankful: Is Ingratitude the Root of Most Sins?