“Trust in the Lord with all your heart, and lean not on your understanding. In all your ways acknowledge Him, and He shall direct your paths” ~ Proverbs 3:5-6

For many people this is a memory verse, both because it’s quite succinctly and beautifully phrased, and also because it is one of those snippets that can be a kind of life mantra.  Often when we read this verse the emphasis is on the first sentence, while the second sentence—that of acknowledging Him and allowing Him to direct us—gets glossed over.  I read it recently and the word “acknowledge” jumped out at me, because I had never really ever thought about what that really means.

See, while the technical definition of the word hasn’t really changed, the way our society uses it definitely has—basically to “give a nod” to.  If you’re walking down the street and you see someone you’ve met before, you’ll often acknowledge them with a nod or wave, basically saying “yeah, I see you”.  Or you may acknowledge someone when they give you a gift, or in centuries past a nobleman might acknowledge an illegitimate child as being his own (bestowing some legitimacy).  So by today’s standards, “in all your ways acknowledge Him” is basically the equivalent of professional athletes pointing to the sky after a touchdown—meaningless.

The trouble is that these understandings of the word render the verse in Proverbs very distant and cold, when the meaning is much more powerful.  The word translated “acknowledge” in most bible translations is yada (H3045), which generally means “to know or recognize”.  In the case of Proverbs 3:6, it is to know His ways inside and out and to recognize that He is the ultimate arbiter of our lives.  It’s a root word so it can be translated many different ways and is used almost a thousand times in the Old Testament.  While most translations use “acknowledge”, the NIV says “in all your ways submit to Him”, while the NLT says “seek His will in all you do”.  Throughout the rest of the bible, yada is most often translated as some form of “to know” (i.e. known, know, knowing), but other uses include “respect”, “understand”, “be sure in”, “consider”, “discover”, and “discern”, and these start to paint a more complete understanding of the word.

Acknowledging God is not a surface tip of the hat, but rather a life-altering change.  In Psalm 51:3, David says, “For I acknowledge my transgressions, and my sin is ever before me.  Against You and You only have I sinned and done this evil in Your sight.”  David is confessing God’s authority in His life—authority that had major consequences for him when David strayed from allowing God to guide him.  As the Pulpit Commentary put it, “To acknowledge God is to recognize in all our dealings and undertakings God’s overruling providence, which ‘shapes our ends, rough hew them as we will’”.

You may also like:  The Symptoms of Spiritual Leprosy

There’s just no way around the fact that acknowledgement of God is active, rather than passive.  Most people will wear a cross necklace or give God a shout-out when something goes right and believe they are obeying the command in Proverbs 3, when all their actions and thoughts couldn’t be further from Him.  Acknowledging God doesn’t mean just turning to Him in times of crisis, or publicly during worship.  This is truly in ALL your ways—public and private, religious and secular.  It is knowing what His Word says forwards and backwards, and living a life that reflects the fact that God is directing it.

The meaning of “He will direct your paths” in Proverbs 3:6 is to make them straight and even, pleasant and prosperous.  That doesn’t mean that nothing in life will ever go wrong, but rather that even the bad things will be bearable because God is sharing the load with you and you know He has an amazing reward planned for you.

I read Matthew Henry’s Concise Commentary on Proverbs 3:5-6 and thought it was really beautiful, and summed up how we must approach this acknowledgement of God.

“Those who know themselves find their own understandings a broken reed which, if they lean upon, will fail. Do not design any thing but what is lawful, and beg God to direct thee in every case, though it may seem quite plain. In all our ways that prove pleasant, in which we gain our point, we must acknowledge God with thankfulness. In all our ways that prove uncomfortable, and that are hedged up with thorns, we must acknowledge Him with submission. It is promised, He shall direct thy paths; so that thy way shall be safe and good, and happy at last.”

Other topics you may enjoy: 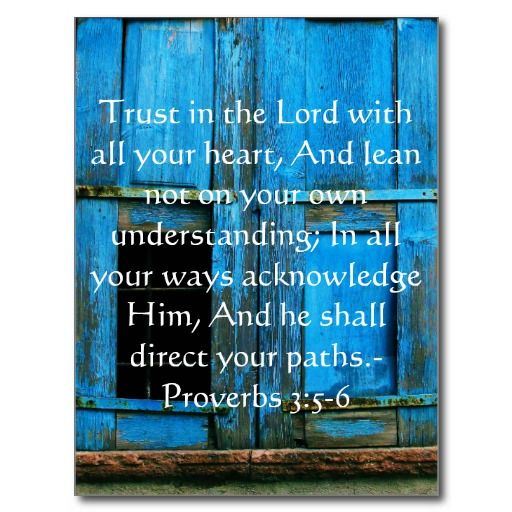 Comparison & Envy – The Key to Unhappiness