Who is the Antichrist? Part 3: The Jewish False Messiah Theory

Editor’s note: This is the third installment in a multi-part series on theories and prophecies about the Antichrist. If you haven’t already, we recommend starting with the Introduction before diving into this post, as well as Part 1: Roman Antichrist Debunked and Part 2: Muslim Antichrist Debunked.

So, without further ado…. I will now lay out an outline of my current working theory on who the Antichrist is.

My current working theory is that Antichrist will present himself as the prophesied Messiah.  A FALSE CHRIST.  Just as the scriptures prophesy.  I don’t really have an opinion as to whether he will present himself as the second coming of Jesus (the true Messiah), or if he will claim that Jesus was not Messiah and he is.  That really isn’t my point.  My point is that Antichrist will claim to be of the line of David, born in Bethlehem, etc.—i.e. a ‘Jewish’ Messiah.  A figure that the end-time “Jews” will believe to be THE Messiah, and many Christians too.  He will work to convince Jews and Christians that he has come to usher in his millennial reign and kingdom.

I think Antichrist will be promoted by a ‘FALSE PROPHET’ that will claim to be a reincarnation of Elijah the prophet.

Not many of us have truly studied the eschatology or end-time beliefs of the adherents of Judaism.  In this presentation, we will explore some Jewish eschatology according to the Talmud and other rabbinic writings.  I will demonstrate how these writings seem to encourage Jews to accept as Messiah a man with very similar characteristics as the biblical Antichrist, and how I believe Antichrist will use the Jewish end-time beliefs to his advantage.

With that said, let’s get something straight right here, right now.  I am NOT taking an anti-Jewish stance, nor am I arguing anything that should be perceived as such.  If you feel that I have degraded or put down the Jewish people at any point in this presentation, then I have spoken poorly, or you have simply perceived my words incorrectly.  Period.  I am not against the Jewish people in any way.

With that announcement out of the way, I would first point out that I am not alone in this belief of a Jewish Antichrist.  In fact, many of the 1st- and 2nd-century elders believed in a Jewish Fake Messiah.  There are also a few modern-day writers and videographers that hold to the Jewish false Christ theory as well.

The person whose writings I have most studied on this subject is Chris White.  Please note – Chris is a Sunday keeper.  In fact, he created a series of videos on why Christians should not keep the Sabbath.  Normally I would pass right by such a person’s work, but I felt very compelled to read his books titled “False Christ”, and “Mystery Babylon”. 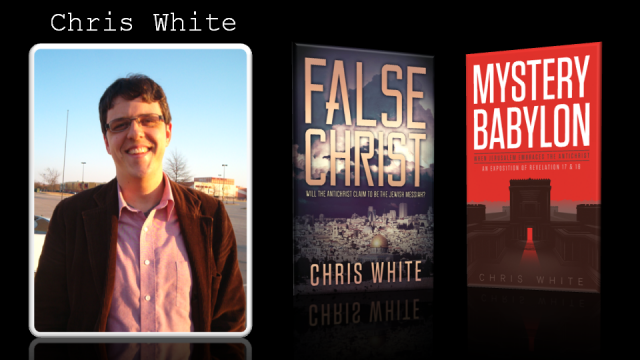 As I mentioned in a previous post, all of my non-core beliefs I hold like a scientist holds their theories—the theory is what I believe until a better theory is presented and tested.  White’s theory is simply the best I have heard so far.  If a new theory comes along and is better than the Jewish False Messiah, then that will be my theory.  Until that time, I will be studying and continuing to test the Jewish False Messiah idea.

With that said – I would like to openly admit that I am borrowing HEAVILY from White’s book “False Messiah” in this presentation.  Some might call that plagiarism.  Whatever.  I’m telling you the reader up front that a lot of what is presented, comes from that book.  I am not claiming that these are my theories.

There are several things that I disagree with White on, and those things will, of course, be omitted from this presentation.

Let’s get back on point here, as I continue to lay out the theory on the Jewish False Messiah.

Before Jesus, it was an almost-universal belief within the 12 tribes of Israel that Messiah would come as a Conquering King.  They believed that He would thoroughly defeat Israel’s enemies and rule with a Rod of Iron.  Therefore, when the real Messiah came as a suffering servant, a great number of Jews just couldn’t believe that He was the prophesied Messiah.  He didn’t fit their preconceived notions of who the Messiah was, and how the Messiah would conduct Himself.

What a wonderful lesson for us all.  The Jews of that time had allowed theories and interpretations about Messiah into their core beliefs when they should have remained open and watchful for Messiah.  The Jews wouldn’t even consider that Messiah would come twice.  Once as a suffering servant, and then as a Conquering King upon His second coming.

And what did this lack of openness cost them?  Everything!  A great number of them could have seen and been with, and maybe even been taught by the One True Messiah, but they missed out on an opportunity that only happened once in the history of the world, because of assumptions based in human interpretations of the Holy Scriptures.

In this presentation, I will attempt to demonstrate that Antichrist will promote himself as the Conquering King that all adherents of Judaism are still waiting for.  He will defend the country of Israel and soundly defeat her enemies.  After which he will convince many that he has come to start his millennial reign, and rule with a Rod of Iron.

Most all adherents of Judaism believe that when the Messiah comes, he will set up his capital for his millennial reign in Jerusalem.  They point to Is. 2:2-4 as proof of this belief.  From the ESV:

“It shall come to pass in the latter days that the mountain of the house of the LORD shall be established as the highest of the mountains, and shall be lifted up above the hills; and all the nations shall flow to it, and many peoples shall come, and say: “Come, let us go up to the mountain of the LORD, to the house of the God of Jacob, that he may teach us his ways and that we may walk in his paths.” For out of Zion shall go the law, and the word of the LORD from Jerusalem.  He shall judge between the nations, and shall decide disputes for many peoples; and they shall beat their swords into plowshares, and their spears into pruning hooks; nation shall not lift up sword against nation, neither shall they learn war anymore” (Is. 2:2-4 ESV)

In my opinion, the Jews rightly interpret these scriptures as pointing to the millennial reign of Messiah, and that ‘a’ Jerusalem is in view.  However, I don’t think those verses are pointing to what we know as Jerusalem today.

With that said, I would suggest that Antichrist is also prophesied to set his capital up in Jerusalem:

“And he shall pitch his palatial tents between the sea and the glorious holy mountain. Yet he shall come to his end, with none to help him” (Dan. 11:45  ESV)

The apostle Paul prophesied that Antichrist, who he called “the man of sin,” would boldly go into the temple of God and blaspheme:

“He will oppose and will exalt himself over everything that is called God or is worshiped, so that he sets himself up in God’s temple, proclaiming himself to be God”  (2 Thes 2:4 NIV)

“From the time that the daily sacrifice is abolished and the abomination that causes desolation is set up, there will be 1,290 days”  (Dan 12:11 NIV)

Where would the Jews most likely build a temple?  In Jerusalem, of course.

Numerous texts within the Talmud stress the importance of and hope for the eventual re-introduction of the sacrificial system.  As such, many Jews today long for and work toward that end.

However, I think almost every Jew in the world (and a great percentage of Christians for that matter) would be ALL FOR sacrifices if they believed that the Messiah had come and was commanding that the sacrifices be re-instituted.

In a future post on the Jewish false messiah theory, I will attempt to demonstrate why I believe the Old and New Testament scriptures do point to the daily sacrifice being re-introduced during the period of time that we are studying—the end of days.  Also, in future posts, I will reveal some of the fascinating similarities between the book of Revelation and the scriptures in Exodus describing the temple service and the daily sacrifice in particular.

Look for those things and more coming soon.

Catch up on the other parts of this series:

Who is the Antichrist? Part 2: Muslim Theory Debunked

Studying Bible Prophecy: Where to Start