A New Lump, Purged From Sin

“Purge me with hyssop, and I shall be clean; wash me and I shall be whiter than snow…Create in me a clean heart, O God, and renew a steadfast spirit within me” (Ps. 51:7, 10)

In a previous year’s study as the Days of Unleavened Bread drew to a close, we explored how the command is that we must eat unleavened bread for seven days—the focus being on taking in Christ as the Bread of Life, rather than on thinking, even unintentionally, that we can get sin (leavening) out of our lives on our own.

One of the scriptures we really focused on in that study was a key passage where Paul tells the Corinthians:

“Therefore purge out the old leaven, that you may be a new lump, since you are truly unleavened.  For indeed Christ, our Passover, was sacrificed for us.  Therefore let us keep the feast, not with old leaven, nor with the leaven of malice and wickedness, but with the unleavened bread of sincerity (clearness, purity) and truth” (I Cor. 5:7-8)

The word translated “purge” in this passage means to cleanse thoroughly, with the implication of cleaning or purging out rather than just wiping down.  It’s a very evocative, active word, and I think the King James translators used it very intentionally in this passage and one other (that we’ll get to later).

I hadn’t ever really thought about why and how the word “purge” is used here, but it caught my attention these past Days of Unleavened Bread, and brought to mind a few trains of thought that I wanted to share.

How are we supposed to become a new lump?

You can’t get leaven out of or “deleaven” your leavened bread dough.  The yeast spores so thoroughly permeate every inch of the dough that it’s physically impossible.  You have to start fresh with new dough.  When the Israelites left Egypt, God forced them to completely throw out their old dough starters, with yeast that had built up multiplied over potentially decades.  But He didn’t want them bringing any of that old leaven with them.

We, too, have to start fresh with new dough, metaphorically-speaking.  Paul covered this topic a LOT.  He illustrated it for us when he said, “For I am crucified with Christ:  nevertheless I live; yet not I, but Christ lives in me” (Gal. 2:20).  In a letter to the Corinthians he told them, “Therefore, if anyone is in Christ, he is a new creation; old things have passed away; behold, all things have become new” (II Cor. 5:17).

When we came to understand the gravity of our former sins, repented, and were baptized, we entered into covenant with God and symbolically died in the watery grave of baptism.  We came out of it as a new being (Rom. 6), free from sin, a new, unleavened lump.  This is our purging, and it continues throughout the rest of our physical lives.

So let’s explore a couple things related to purging out our old leaven and being purged from sin.  I’ll try not to get *too* graphic, but there are some parallels to our physical experiences that are hard to ignore.  Like I said, they chose the word for a reason 🙂

Purging happens from the inside out

We know this from physical purging—it’s all about what’s happening inside of us.  You can’t see it from the outside, but you still know something’s wrong.  It isn’t about using a power sprayer and slapping on a fresh coat of paint and calling it a day.  That’s where the Pharisees ended up with their “whitewashed tombs…which are full of dead men’s bones and all uncleanness” (Matt. 23:25-28).

This type of spiritual purging isn’t possible to achieve on our own, however:

“For if the blood of bulls and goats and the ashes of a heifer…sanctifies for the purifying of the flesh, how much more shall the blood of Christ, who through the eternal spirit offered Himself without spot to God, cleanse [purge out] your conscience from dead works to serve the living God?” (Heb. 9:13-14)

We are sanctified, or set apart, by God’s truth—and by Christ, as the Word (John 17:17, 14:6).  Another way to say this is that we are purified and made holy by His truth.  If we know His truth and put it into action in our lives, that truth will set us free (John 8:32), free from the bondage of sin, from the pull of a life focused on worldly pursuits.

That can only happen by God working in us through His spirit.  The Word (YHWH, who later came to earth as the Messiah) told Israel, “I will give you a new heart and put a new spirit within you; I will take the heart of stone out of your flesh and give you a heart of flesh” (Ezek. 36:26).  Having my heart removed sounds pretty messy and uncomfortable to me…and it is.  Which brings us to the next thought.

It’s generally fairly violent.  The body recognizes something that isn’t right and ejects it as quickly as possible.  And it’s involuntary.  Let’s face it—if left to our own devices, we wouldn’t purge ourselves from sin.  God has to intervene, the outside force starting the process.

But we fight Him.  Our human nature, egged on by Satan’s influence, is hostile to God.  Paul has a lot to say about this particular topic as well.  He tells us that “the flesh lusts against the spirit, and the spirit against the flesh; and these are contrary to one another, so that you do not do the things that you wish” (Gal. 5:17).  If we’re not careful, we’ll try and fight the purging process (we’ve all been there physically, am I right??) and make it harder for ourselves in the process—like Paul’s “kicking against the goads” (Acts. 26:14; deeper study on that passage in the link).

Why must we be purged from sin?

Let’s look at the only other place that particular word (ekkathairo) is used in the bible.  Paul writes to Timothy, telling him, “Therefore if anyone cleanses [purges] himself from the latter, he will be a vessel for honor, sanctified and useful for the Master, prepared for every good work” (II Tim. 2:21).

A vessel suggests being empty, a place for something or someone to reside.  Taken on face value, this purging process seems kind of harsh.  But think of it instead as though God is hollowing us out, so He can fill us with something better.

And that’s the key, and why it’s so critical that we take in the bread and the wine at Passover, and take in unleavened bread every day during the Days of Unleavened Bread.  It’s not good enough to just let God hollow us out and stop there, because nature abhors a vacuum and Satan will find a way to fill that void.

Our calling is to replace what was purged (the uncleanness and sin) with something else.  We must have Christ abide in us and be a dwelling place for God’s spirit, collectively His spiritual temple (Eph. 2:21-22) so we can be a new lump—a brand-new creation, re-made as a spiritual heir of God. 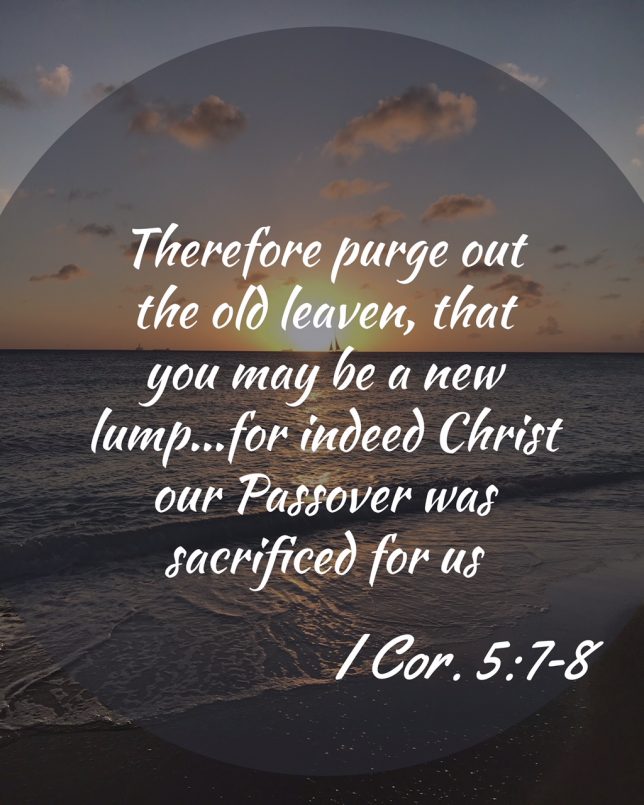 Studying Bible Prophecy: Where to Start

Who is the Antichrist? Part 4: Jewish False Messiah Theory (cont…)